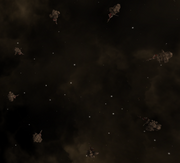 The 8 asteroids acting as the gate through The Barrier, currently inactive. 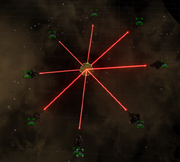 Once the 8 ships with the 8 XSTN-K are in place, the gate through The Barrier will open.

The Barrier, as the name suggests, is a barrier blocking the player from entering a radius of 150 sectors of the galaxy's middle. The Barrier functions and looks like space-time rift - although it's circular in shape and not shaped like a rift - and therefore it cannot be seen as a physical object, and it is only marked on the map.

Getting past The Barrier[edit | edit source]

To get past The Barrier, the player has to find a sector with a hidden mass signature very close to the barrier. The sector will contain nothing but 8 asteroids. These asteroids will, when active, serve as a gate to get past The Barrier. To activate them, the player must collect all 8 XSTN-K artifacts. Each asteroid is labeled from 1-8 in roman numerals (I, II, III, etc.), and each XSTN-K artifact is labeled in the same manner.

When all 8 XSTN-K artifacts are in place, all 8 asteroids will collectively shoot a red beam into the center of the circle, that the 8 asteroids create, and a wormwhole will open. This will however trigger a fleet of Xsotan ships to enter the sector, but they won't attack unless a turret is fired as with other Xsotan fleets.

Once the player gets past The Barrier, they will encounter a large number of Xsotan ships. The Xsotan will not only appear at random through subspace, but they can also be found in sectors with hidden mass signatures. Within these sectors, a large number of Xsotan ships will reside, being neutral towards the player, until a turret is fired which will make them hostile. When near the very center of the galaxy, the player will almost solely meet Xsotans, although it is possible to meet other faction outposts.

Bear in mind, that Avorion can be found very quickly when across The Barrier, which will make the player able to jump over tears in space-time, and therefore rendering the gate useless once Avorion is found.