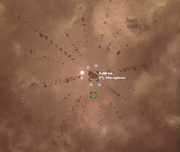 To find Specimen, you need to search for a hidden mass sector ( usually in the Naonite regions ) with a asteroid pattern pointing to a big asteroid in the middle. When you come close enough, you can investigate that asteroid and it will give you coordinates. When you jump to these sectors ( they are marked as hidden mass sectors ) you will likely find a system with the same content as the previous. Now you just hunt down these system.

You might jump into a system with multiple asteroids given different coordinates each, so you might have to search around a bit.

Because it's shields are invulnerable, you first need to destroy the 4 asteroids which are connected by a light beam to it. Due to the high amount of HP the asteroids have, make sure you have enough HP yourself. When you destroy one, the boss's shields lose 25% of their initial HP. After you destroyed all 4, the boss behaves like a normal ship but with a lot more HP compared to the usual ships in the Naonite regions.

You can safely mine the asteroids before engaging him if you keep your distance.