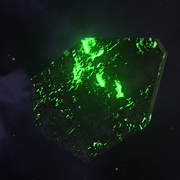 Naonite is the third material tier in the game. It has very moderate stats for a block, with 33t weight for a 1m3 cube and 9hp for a cube of the same size, base. This tier is especially known for its addition of shield generators, integrity field generators, and hyperspace cores.

Naonite can easily be feasible in an offensive standpoint, due to its addition of the shield generators. Inclusively, Naonite is also pretty great for civilian tasks like mining and salvaging due to the material being average enough that it isn't too slowed down.

Naonite can be found earliest at a radial distance of 375. However, it is still rare at about range, so it is advised to jump several sectors closer to the galactic center to get a richer presence of Naonite asteroids and ships that utilize the material.

The player can buy Naonite from Resource Depots starting from this distance.

Naonite can be used in ships like any other material, wherein it's consumed when you build Naonite-based blocks on your ship, or when you repair damaged naonite blocks on a ship.

Like all other materials, it can also be sold to resource vendors for credits.